This 4v2 game will focus on building an attack near the penalty area and getting shots on goal. Forwards will have to make a decision to turn and score or lay the ball off to the mid-fielder. The focus of this drill is score, score, score! 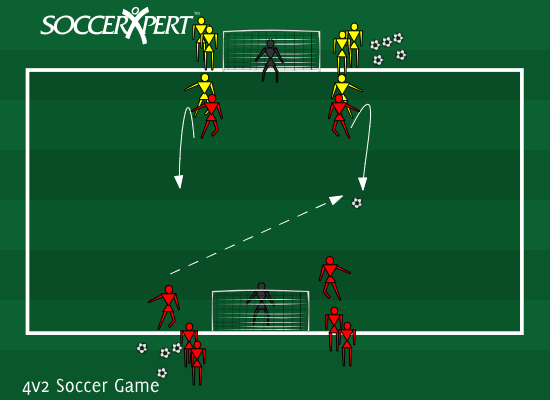 This 4v2 game will focus on building an attack near the penalty area and getting shots on goal.

Chris Johnson 132,003 Views Rating 4.4 (5 Reviews)
It's always good to finishing a soccer training session with a 7 vs. 7 scrimmage to focus on team play.

Chris Johnson 421,902 Views Rating 4.3 (10 Reviews)
Spice up your shooting combination drill by finishing with a 1v1 to goal. Add a fun little twist, and the kids love it.

John Bychok 660,701 Views Rating 4.27 (384 Reviews)
This drill is an excellent drill for younger players ages 8-11 and focuses on dribbling technique in traffic which requires vision and awareness.

Chris Johnson 725,051 Views Rating 4.2 (284 Reviews)
The Four Corners Soccer Passing Game is a great soccer passing drill to focus on changing the point of the attack, and timing of runs and passes.