When coaching Under 9, Under 10, Under 11, and Under 12, the player's motor skills are becoming more refnied. Most players can stay on task at a greater length allowing you to extend your practices to an hour and a half or, in some instances, competitive team environments, two hours. You will notice skills starting to emerge, and the repetition of technique is essential. Coaches should continue positive reinforcement as peer pressure is starting to become an issue.

With the player's technique learned at an earlier age is now time to refine these skills with an introduction to basic tactics. Small-sided games will become your primary teaching means. With small-sided games such as 1v1, 2v2, 3v3, and 4v4, players will receive tons of touches while focusing on less complicated tactics than a 11v11 match.

My #1 piece of advice is to play small-sided games and put an emphasis on creating a competitive environment as much as possible. This will keep the small-sided games fun for the players and teach the game itself.

Chris Johnson 121,412 Views Rating 4.4 (5 Reviews)
It's always good to finishing a soccer training session with a 7 vs. 7 scrimmage to focus on team play.

Chris Johnson 395,791 Views Rating 4.3 (10 Reviews)
Spice up your shooting combination drill by finishing with a 1v1 to goal. Add a fun little twist, and the kids love it.

John Bychok 641,618 Views Rating 4.27 (384 Reviews)
This drill is an excellent drill for younger players ages 8-11 and focuses on dribbling technique in traffic which requires vision and awareness.

Chris Johnson 207,248 Views Rating 4.24 (75 Reviews)
4v4 in soccer is the smallest game focusing on all aspects of a full sided soccer match.

Chris Johnson 697,829 Views Rating 4.2 (284 Reviews)
The Four Corners Soccer Passing Game is a great soccer passing drill to focus on changing the point of the attack, and timing of runs and passes.

Chris Johnson 293,775 Views Rating 4.2 (147 Reviews)
This drill is great to focus on 1v1 play. It is flexible and can be used to work on the offensive side or the defensive side. 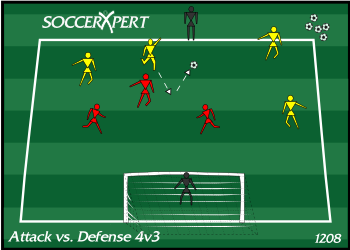 Chris Johnson 346,482 Views Rating 4.18 (119 Reviews)
This drill focuses on attackers with a numerical advantage. Attackers must learn how to exploit their advantage and finish with a shot on goal. 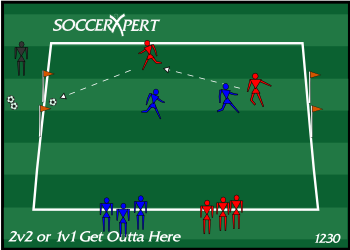 Chris Johnson 141,280 Views Rating 4.18 (33 Reviews)
This drill is a very fast paced1v1 or 2v2 game that focuses on aspects of the small sided game such as dribbling, passing, and scoring. 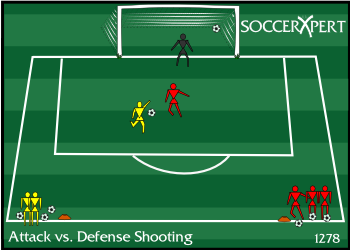 Chris Johnson 353,658 Views Rating 4.17 (155 Reviews)
This Attack vs. Defence Shooting and Defending Drill works on both attacking and defending skills. 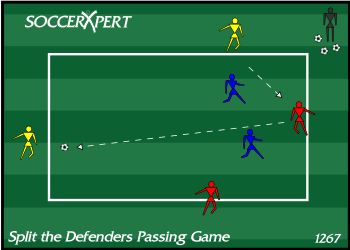