4v4, Thirds of the Field, Shape and Positioning

This 4v4 drill is great for improving shape and positioning. Each player has their own responsibility: 1) attacker/target player stretches the field closer to the goal they are attacking. 2) winger players stretch the width of the field. 3) defensive player gives support to wingers and target player while staying the last man. 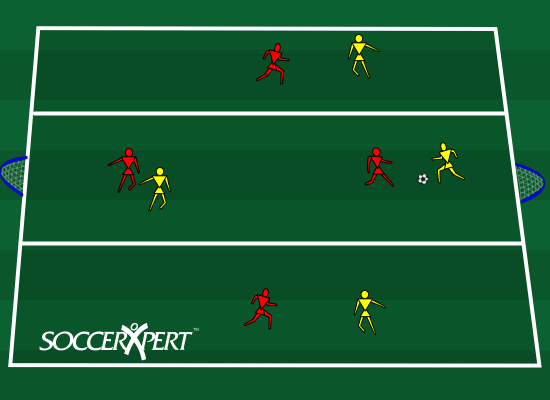 4v4, thirds of the field, improve shape and positioning

This 4v4 thirds of the field drill is great for improving shape and positioning.

Chris Johnson 129,970 Views Rating 4.4 (5 Reviews)
It's always good to finishing a soccer training session with a 7 vs. 7 scrimmage to focus on team play.

Chris Johnson 514,626 Views Rating 4.3 (166 Reviews)
The Sharks and Minnows dribbling drill focuses on using the body to protect the ball by placing their body in between the ball and the defender.

Chris Johnson 417,805 Views Rating 4.3 (10 Reviews)
Spice up your shooting combination drill by finishing with a 1v1 to goal. Add a fun little twist, and the kids love it.

John Bychok 658,166 Views Rating 4.27 (384 Reviews)
This drill is an excellent drill for younger players ages 8-11 and focuses on dribbling technique in traffic which requires vision and awareness.

Chris Johnson 215,933 Views Rating 4.24 (75 Reviews)
4v4 in soccer is the smallest game focusing on all aspects of a full sided soccer match.

Chris Johnson 720,883 Views Rating 4.2 (284 Reviews)
The Four Corners Soccer Passing Game is a great soccer passing drill to focus on changing the point of the attack, and timing of runs and passes.

Chris Johnson 304,736 Views Rating 4.2 (147 Reviews)
This drill is great to focus on 1v1 play. It is flexible and can be used to work on the offensive side or the defensive side.

Chris Johnson 649,184 Views Rating 4.18 (268 Reviews)
A FUN soccer drill for younger players (U6, U7, and U8) to introduce dribbling, looking up and correctly striking the ball at a target.