This is a great passing drill that focuses on holding possession and completing a series of passes. This possession passing drill will work on awareness, speed of play, support, and movement to maintain possession. 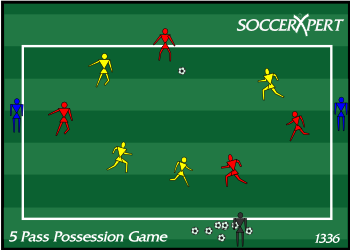 This is a great passing drill that focuses on holding possession and completing a series of passes. This possession passing drill will work on awareness, speed of play, support, and movement to maintain possessino.


Create a grid approximately 40 yards x 30 yards. Split players into 2 even teams with two other players as neutral players. The neutral players are positioned at the endline on each end of the field.


The two teams attempt to hold possession from each other within the grid. To score a goal, a team must make 5 or more consecutive passes to their teammates and then must make the 6th pass to either of the neutral players. If the ball is touched or won by the opposition, the pass count is reset.

Once the neutral player receives a scoring pass they must pass the ball in one touch to the team that scored and their pass count is reset.

Play to 10 and make the losing team do pushups or situps.

The Figure Eight soccer dribbling drill is a good change to weaving in and out of cones and is great for dribbling with the inside and outside of the foot.

The Zig-Zag soccer dribbling drill focuses on dribbling with speed with the inside, the outside, and the bottom of the foot.

The T-Cone soccer dribbling drill is a great drill to focus on dribbling with speed, controlled touches, turns, and fitness.

Catch Me If You Can

The soccer dribbling drill is a fun and competitive exercise that focuses on dribbling with speed.

This soccer shooting drill focuses on agility and check-runs after the pass.

Inside of the Foot Passing Warm-up

This passing warm-up drill will focus on accuracy when passing with the inside of the foot.

This 6 vs 4 team training drill focuses on team movement, communication, and passing. This is a great session to end on after an intense passing practice.

A 7v7 scrimmage is a great way to end most of your training sessions. The 7 vs 7 allows players to focus on team tactics in realistic training situations and respond to problems presented in the full-sided game.