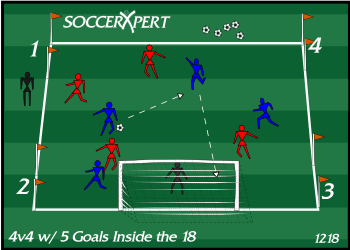 This 4v4 drill is one of my favorite soccer finishing drills as it works on every aspect of finishing inside the 18-yard box.

This game does an excellent job or working on spacing and runs as well as finishing, communication, and vision. The blue player might start by goal 3, draw a defender to her and then make a far post run to receive a cross from a teammate by goal 1.
Drill Variations

Chris Johnson 132,005 Views Rating 4.4 (5 Reviews)
It's always good to finishing a soccer training session with a 7 vs. 7 scrimmage to focus on team play.

Chris Johnson 421,907 Views Rating 4.3 (10 Reviews)
Spice up your shooting combination drill by finishing with a 1v1 to goal. Add a fun little twist, and the kids love it.

John Bychok 660,704 Views Rating 4.27 (384 Reviews)
This drill is an excellent drill for younger players ages 8-11 and focuses on dribbling technique in traffic which requires vision and awareness.

Chris Johnson 725,053 Views Rating 4.2 (284 Reviews)
The Four Corners Soccer Passing Game is a great soccer passing drill to focus on changing the point of the attack, and timing of runs and passes.

Chris Johnson 650,982 Views Rating 4.18 (268 Reviews)
A FUN soccer drill for younger players (U6, U7, and U8) to introduce dribbling, looking up and correctly striking the ball at a target.