This shooting warm-up drill will focus on long-range passing, accuracy, and finishing. It can also be used as a fitness exercise by manipulating the numbers. 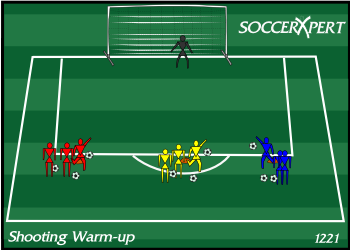 This soccer shooting drill is a great warm-up that focuses on long range passing, accuracy, finishing, and fitness drill.


Exercise #1: Shoot the ball into the goal, and the ball must hit the back of the net in the air. It cannot bounce before it goes in the goal.
Exercise #2: Hit the crossbar

Exercise #1: Shoot the ball into the goal, and the ball must hit the back of the net in the air. It cannot bounce before it goes in the goal.
Exercise #2: Hit the crossbar


You can do this same exercise a number of different ways:

Chris Johnson 101,728 Views Rating 4.4 (5 Reviews)
It's always good to finishing a soccer training session with a 7 vs. 7 scrimmage to focus on team play.

Chris Johnson 463,806 Views Rating 4.3 (166 Reviews)
The Sharks and Minnows dribbling drill focuses on using the body to protect the ball by placing their body in between the ball and the defender.

Chris Johnson 348,485 Views Rating 4.3 (10 Reviews)
Spice up your shooting combination drill by finishing with a 1v1 to goal. Add a fun little twist, and the kids love it.

John Bychok 608,828 Views Rating 4.27 (384 Reviews)
This drill is an excellent drill for younger players ages 8-11 and focuses on dribbling technique in traffic which requires vision and awareness.

Chris Johnson 188,824 Views Rating 4.24 (75 Reviews)
4v4 in soccer is the smallest game focusing on all aspects of a full sided soccer match.

Chris Johnson 650,467 Views Rating 4.2 (284 Reviews)
The Four Corners Soccer Passing Game is a great soccer passing drill to focus on changing the point of the attack, and timing of runs and passes.

Chris Johnson 271,330 Views Rating 4.2 (147 Reviews)
This drill is great to focus on 1v1 play. It is flexible and can be used to work on the offensive side or the defensive side.

Chris Johnson 611,042 Views Rating 4.18 (268 Reviews)
A FUN soccer drill for younger players (U6, U7, and U8) to introduce dribbling, looking up and correctly striking the ball at a target.