4v4 Playing Wide Out of the Back

This drill is designed to get players to play balls wide when playing from the back, the defensive third of the field. Players recognize that they find more time and space on the outsides of the field and they are relieving the center of the pitch from dangerous play. 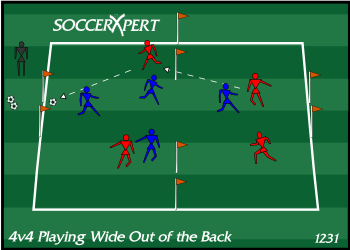 This drill is designed to get players to play balls wide when playing from the defensive third of the field.

Soccer Drill Titled: 4v4 Playing Wide Out of the Back
Tagged: 4v4, Playing wide, Switching the Point of Attack
Published by: Chris Johnson

Chris Johnson 121,213 Views Rating 4.4 (5 Reviews)
It's always good to finishing a soccer training session with a 7 vs. 7 scrimmage to focus on team play.

Chris Johnson 499,406 Views Rating 4.3 (166 Reviews)
The Sharks and Minnows dribbling drill focuses on using the body to protect the ball by placing their body in between the ball and the defender.

Chris Johnson 395,420 Views Rating 4.3 (10 Reviews)
Spice up your shooting combination drill by finishing with a 1v1 to goal. Add a fun little twist, and the kids love it.

John Bychok 641,350 Views Rating 4.27 (384 Reviews)
This drill is an excellent drill for younger players ages 8-11 and focuses on dribbling technique in traffic which requires vision and awareness.

Chris Johnson 207,089 Views Rating 4.24 (75 Reviews)
4v4 in soccer is the smallest game focusing on all aspects of a full sided soccer match.

Chris Johnson 697,413 Views Rating 4.2 (284 Reviews)
The Four Corners Soccer Passing Game is a great soccer passing drill to focus on changing the point of the attack, and timing of runs and passes.

Chris Johnson 293,559 Views Rating 4.2 (147 Reviews)
This drill is great to focus on 1v1 play. It is flexible and can be used to work on the offensive side or the defensive side.

Chris Johnson 636,777 Views Rating 4.18 (268 Reviews)
A FUN soccer drill for younger players (U6, U7, and U8) to introduce dribbling, looking up and correctly striking the ball at a target.