This is a passing warm-up drill that is a great start to every practice and before a game. Players will get a lot of touches on the ball and can focus on receiving and passing while getting in a good warm-up. 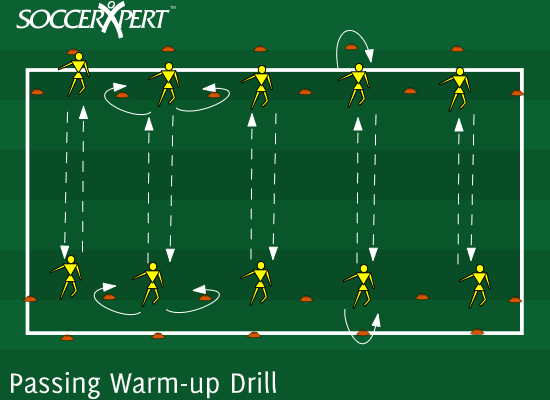 This is a passing warm-up drill that is a great start to every practice and before a game.


In this warmup drill, run through a few of these variations for 3-4 minutes each.

Chris Johnson 132,003 Views Rating 4.4 (5 Reviews)
It's always good to finishing a soccer training session with a 7 vs. 7 scrimmage to focus on team play.

Chris Johnson 421,902 Views Rating 4.3 (10 Reviews)
Spice up your shooting combination drill by finishing with a 1v1 to goal. Add a fun little twist, and the kids love it.

John Bychok 660,701 Views Rating 4.27 (384 Reviews)
This drill is an excellent drill for younger players ages 8-11 and focuses on dribbling technique in traffic which requires vision and awareness.

Chris Johnson 725,051 Views Rating 4.2 (284 Reviews)
The Four Corners Soccer Passing Game is a great soccer passing drill to focus on changing the point of the attack, and timing of runs and passes.