Support Players; Helping the Person With the Ball

Supporting players with the ball requires early support from teammates without the ball by anticipating the play, reading the field, and knowing your teammates. 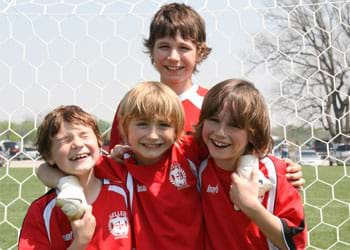 Soccer Possession and Support; Supporting the Player with the Ball

Supporting players with the ball requires early support from teammates without the ball by anticipating the play, reading the field, and knowing your teammates.


Possession is a critical principle, which often determines the success or failure of a team. Properly supporting players with the ball requires early support from teammates without the ball. This initial support comes from anticipating the play, reading the field, and knowing your teammates. One misconception among players is that when their team is in possession, and they are not in control of the ball, that they are not affecting the team’s possession. The exact opposite is true. Every player on the field determines whether the team is successful at holding possession.

As we said, do not overlook the fact that supporting the player with the ball is an important key factor. Teams must keep possession for long periods to be successful. Often, the length of the possession is directly related to the number of passes and the quality of the passes as well as the support. The supporting player (player off the ball) is vital and determines how well the player with the ball plays.

Supporting players shape defines options. Players without the ball should position themselves at an angle so that there is a clear pathway for the ball to travel without a chance of interception. If a supporting player is too flat, they may be hiding behind a defender and not giving the player with the ball a good passing lane. The player with the ball should have three options at all times at any given moment to pass to a teammate.

Supporting players must work hard to quickly position themselves in a way that they keep/create as much space as possible in front of them. The player with the ball should concentrate on passing the ball so that the player who receives the ball can control it very quickly and easily. Once a player passes the ball, the supporting players should move quickly off the ball and reposition themselves to support again. It is imperative to keep space in front of you when you are helping the player with the ball so that you will have time to play the next pass when you get the ball.

If a player cannot play forward or receives the ball facing their goal, then they must have support from their teammates coming towards them. The best position is at a slight angle and about 10-15 yards away. This spacing allows for a fair degree of error for the forward in playing the ball back. The supporting player has space and time to use the ball in the area directly in front of them. The key to success is to learn to anticipate play when you are not immediately concerned.

Remember, good passes become bad balls when they are unsupported, and good players can look bad if the team is not supporting them when in possession.

Soccer Drill Titled: Support Players; Helping the Person With the Ball
Tagged: Soccer Possession and Support; Supporting the Player with the Ball
Published by: Chris Johnson

What is a Rondo in Soccer?

Chris Johnson 5,567 Views
What is a Rondo in Soccer? Rondo is a soccer game of keep away in a small circle or square playing area.

Chris Johnson 5,408 Views
One versus one, also known as 1v1, 1vs1, or one-on-one, is the smallest game-like activity in soccer.

Chris Johnson 68,272 Views
Soccer skills, the touch one has when passing, trapping, receiving, or shooting, are an important part of being successful in soccer.

Chris Johnson 22,742 Views
Indoor soccer is a great way to get extra training sessions in while in the off-season.